We had a ferocious thunderstorm hit us for a half hour or more the other day.

Reminded me of movies I've seen of rain like that in the jungles.

The squash and gourd vines took a beating and a day or so later Judy went out to check on them.

In so doing, she plucked a couple of squash. 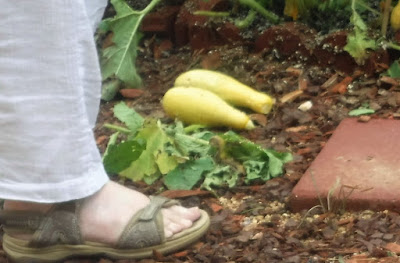 You can see the plant leaves that did not survived the abuse they took.
And the squash were quite small though usable in the kitchen she said. 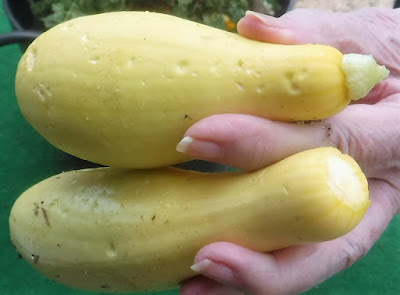 She sliced them up and sauteed them with some onions and mini-peppers.
They were pretty bland.
But today there's a recipe in my cooking companion, the New York Times, for zucchini.
(Actually there are a plethora of recipes for zucchini, that most plethorous of plants.)
(I don't know if "plethorous" is actually a word but I think if you've ever grown zucchini you get the picture.)
But getting back to the recipe, it calls for sauteeing planks of the zukes, then a quick bath in some brown butter, garlic and rosemary, before serving them with red pepper flakes, coarse sea salt and a spritz of lemon.
Since our summer squash is a relative of zucchini, both the Master Chef and I think that ought to give them some mouth appeal.
I'll let you know.
(p.s. Apparently plethorous was not a real word.
Until now.
The Great Google found another word for what I meant: plethoric.
Use whichever one you prefer.)
Posted by Catalyst at 1:10 PM