﻿I sent this picture to one of my granddaughters the other day.  She's a very intelligent girl who has a degree in International Studies after spending several years at a University in Israel.  But she's never used it and works now as a prison guard.  Well she says they're called corrections officers now but she still works in a state prison and carries a gun.  But her other job, which is self taught (I should have mentioned that she has the family gene for artistic prowess) is that as a tattoo artist.  So, as I said much earlier, I sent her this picture recently. 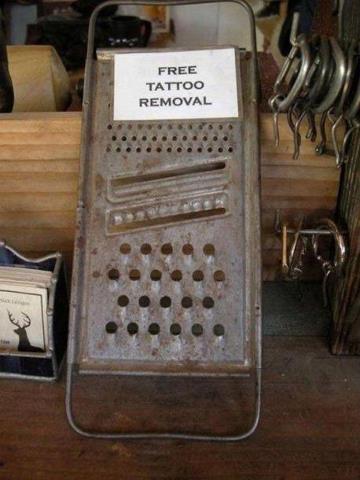 Being blessed also with a great sense of humor, she responded with a laugh and said she'd have to find one and put her own label on it.  She said she had one client who got a wedding band tattoo when he got married, then had it lasered off when he got divorced four months later.  Now he's asking her about a new tat for his new wife-to-be.  She said it reminded her of this Norman Rockwell painting. 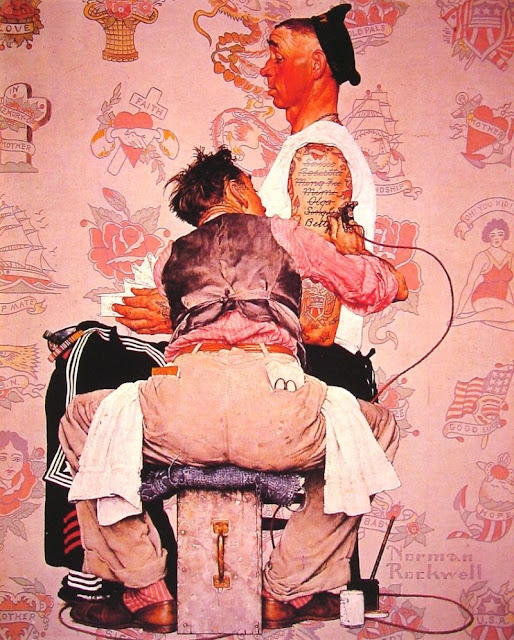 ﻿She said those guys who constantly change their minds, as well as their wives or girlfriends, are great for business!
Posted by Catalyst at 7:01 PM

I don't have any tattoos, but I've always heard that putting your significant other's name on you permanently meant your relationship would be anything BUT permanent. Why tempt fate? ;)

I know a guy from my sailing days who has a very cool tattoo. He and his wife sailed around the world over a period on 5 years and every country they visited is represented by a tiny flag done as a band around his left arm, his wife has the same only on her ankle. 21 countries each. It tells their story.
BTW, our German Shepard has a litter tattoo.

I love the idea of tattoos but I've never seen one that I thought would look good enough to carry with me for the rest of my life. Fun picture and I always enjoy Norman Rockwell.

Always wondered what happens when the skin sags, does the design implode?

Tom - I'm afraid it does. Christy has way too many tattoos herself and her grandmother has tried to warn her about them, to no avail.

Enjoyed the post. I don't have a tat, but there is still time.

Ouch ouch ouch! Getting a tattoo just sounds so painful - and then to use a GRATER to get it off... I've covered my eyes now & I'm backing away slowly... Heh.

No tatts here, but my daughter has several, (to my horror at the time)& Honey has a tatt in her ear to signify she is desexed!

Go for the business part and for the "tatoo grater" :-) A great find.