Ladies and Gentlemen (My Friends), the next president of the United States of America. 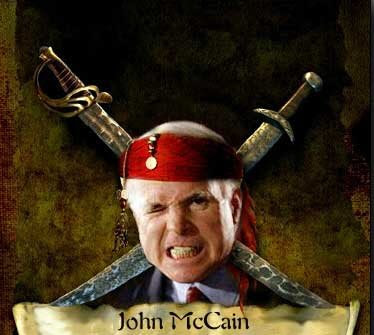 Now if that doesn't scare the hell out of you, I don't know what will. 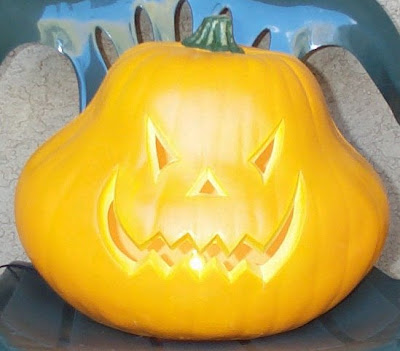 Happy Halloween, everyone!
Posted by Catalyst at 3:30 PM 5 comments:

John McCain may not only lose the presidential race next Tuesday, he may lose his own state.

These are the results of a brand new poll in Arizona.

Labels: McCain in dead heat in his own state

SWMBO made a pot roast a week or so ago. When I asked her today what we would have for supper tonight, she said "I think I'll run the pot roast past us one more time. But there's plenty of meat but I'm low on vegetables. Guess I'll have to cook some up to add to the meat."

A little while later, I could hear some sizzling sounds and smell a great aroma coming from the kitchen. On a trip through the room, I saw this wonderfully colorful melange in a large saute pan on the stove. I said "that deserves a photograph." 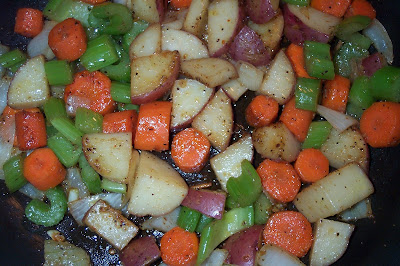 So click on that photo to enlarge it, view it's glory, then close your eyes, lean back and smell that flavorful aroma. Then . . . come on over!
Posted by Catalyst at 5:25 PM 4 comments:

Prescott Valley's newest big box store opened last Thursday and judging by the crowds of people flocking to the store it's going to be a huge success.

Welcome Sam's Club, the warehouse outlet associated with the Wal-Mart empire and worthy competitor to the Costco store located just a few miles up the road toward Prescott. 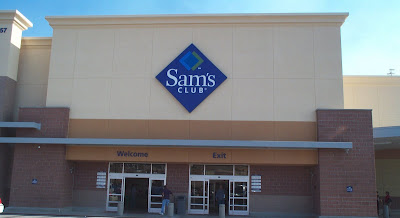 As I see it, the biggest disadvantage to the store right now are the lines and lengthy time it is taking to buy a membership. I had done a tour of the store last week and liked what I saw (plus it's closer than Costco to where I live) so today I grabbed a spot in line and waited. It took awhile but finally I had my membership card in hand and went to find SWMBO, who had been touring the store. 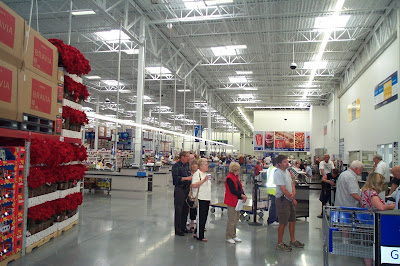 Sam's and Costco are very much alike in store layout, merchandise and price but I find the new Sam's Club to be much brighter due at least in part to a great number of skylights throughout the store. I had originally thought it was just more white paint and perhaps brighter lights but another shopper had noticed the skylights and called them to my attention. You can see a number of them in the following photos. 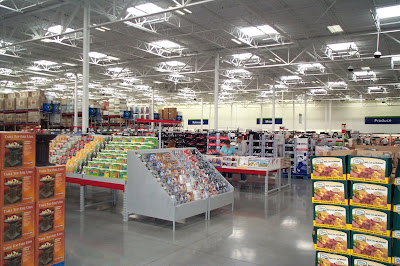 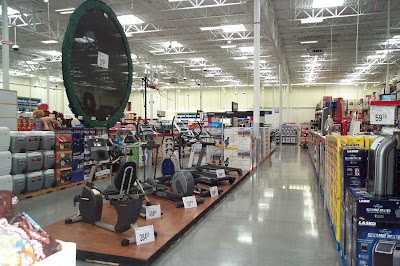 SWMBO also noticed that through the center part of the store the shelves are lower than at Costco, giving good line-of-sight and perhaps contributing to the brightness.

At any rate, it is a fine addition to the town and again judging by the crowds the economic downturn doesn't seem to be having a large effect in Prescott Valley. 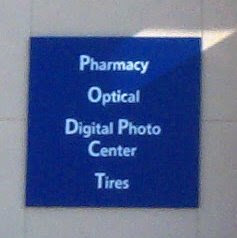 T. Boone Pickens is a man who has made many fortunes in the oil business.

He is now 80 years old and has changed his tune.

Something he is famous for is the answer: wind power.

The rich windbag says we have to build many huge windmills across our country and link them to multi-million dollars worth of transmission lines to take our dependence away from . . . you guessed it, OIL!

Funny. This happened about the time the stock market crashed, reducing Pickens' hedge fund value by half.

While I favor solar power, wind power and other green sources of energy, I must say: Don't buy this charlatan's message. He is in it for his own pocketbook. Purely.

(This is the man who personally funded the lying, slime-covered Swift Boat attacks on John Kerry four years ago. He says he would do it again. He is an evil man. Reject him.)
Posted by Catalyst at 7:03 PM 6 comments:

There are only 10 days to go to Election Day 2008 and the 3rd game of the World Series is in a rain delay. Is it a sign? Damn, I'll be glad when this is over.

A friend sent me this . . . maybe to cheer me up.
One day God was looking down at Earth and saw all of the rascally behavior that was going on. So he called one of His angels and sent the angel to Earth for a time. When he returned, he told God, 'Yes, it is bad on Earth; 95% are misbehaving and only 5% are not. God thought for a moment and said, 'Maybe I had better send down a second angel to get another opinion.'

So God called another angel and sent him to Earth for a time. When the angel returned he went to God and said, 'Yes, it's true.The Earth is in decline; 95% are misbehaving, but 5% are being good.'

God was not pleased. So He decided to e-mail the 5% that were good, because he wanted to encourage them, and give them a little something to help them keep going.

Do you know what the e-mail said?


Okay, I was just wondering, because I didn't get one either.
Posted by Catalyst at 6:01 PM 4 comments:

Tom Sawyer (SWMBO) has been busy in our back yard. 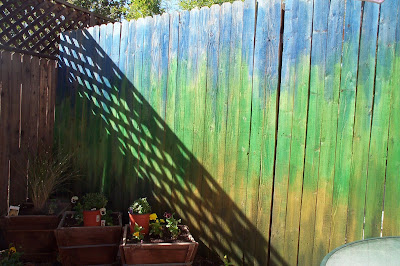 She decided the new fence was too stark with just the simple, unpainted wood. So she got some stain and some pigment, created her own colors and painted away. 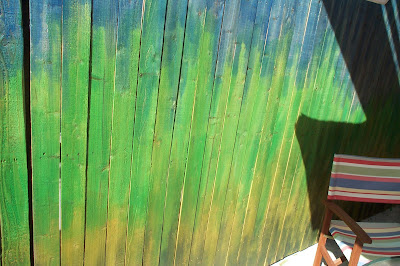 She said tie-dye was her inspiration. I think those French impressionists may also have had an influence on her. 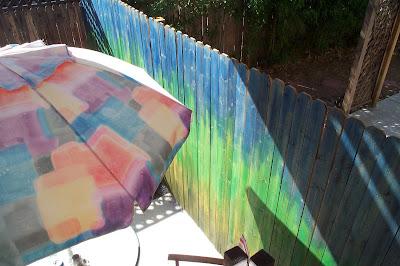 With that patio umbrella, it is a colorful back patio.
Posted by Catalyst at 12:20 PM 11 comments:

A friend sent me an e-mail with photos of strange buildings from around the world. Included was one that claimed to be a public library in Kansas City, Missouri. Here's the photo. 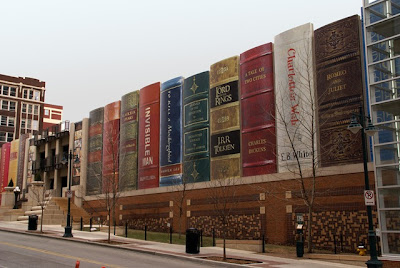 It is truly an amazing bit of ingenuity . . . if it's real. Anyone actually seen it who can verify its accuracy?

Update: I went to the web and researched this. It's real! The books are actually on the face of the parking garage for the library. You can see many more pictures of this amazing library . . both inside and out . . by running the slide show here.
Posted by Catalyst at 10:46 AM 5 comments:

Prescott Valley's new town library is steeling itself for the town's readers.

Funny. You'd think a building that used to house prim little ladies whispering "shhhhh" to noisy patrons wouldn't be made out of steel.

Anyway, here's a look at the project, which will also house some classrooms for the P.V. campus of Yavapai College. 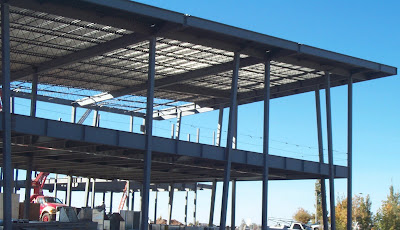 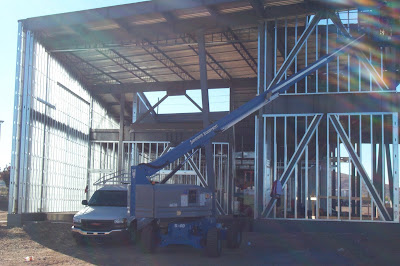 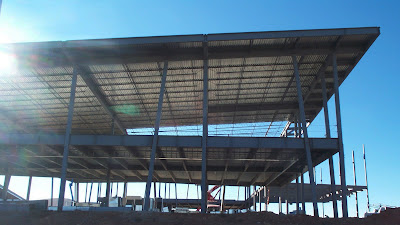 Ah, the days and nights are cooler, with crisp breezes blowing.

And the leaves are changing color . . from green to golden . . . 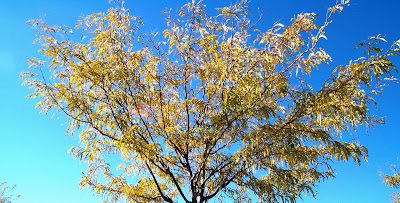 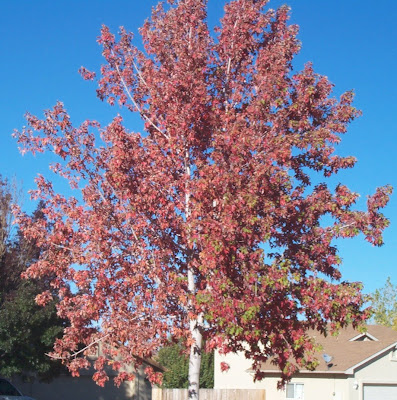 Some trees, like this big Globe Willow, are still in transition. 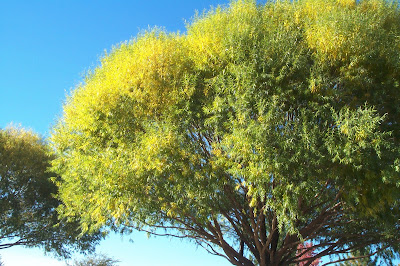 And there are other signs of autumn as well. 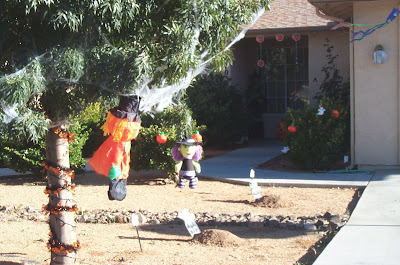 Note the young man who constructed this Halloween scene even dug a couple of graves with tombstones in his front yard. Ingenious!
But there are other less pleasing signs of the season.
They seem to appear nearly every year nowadays.
Call it "Campaign Clutter."

One candidate for state office used his garage door as his sign-posting space.

As always, clicking on the individual photos will render them larger!
Posted by Catalyst at 4:05 PM 10 comments:

Word has it that John McCain is showing up Thursday night to make up with Dave on the Letterman Show.

Beef on the Hoof

These pictures were all taken just a couple of blocks from where I live. It's a big open field and sometimes the rancher who owns it has his cattle grazing on it.

This big fella doesn't look pleased. I'm not sure whether he's got his rear foot tangled up in that brushy tree or if he's just thinking about taking on the wise guy with the camera. At any rate he got his foot untangled and turned to give me this nice profile. 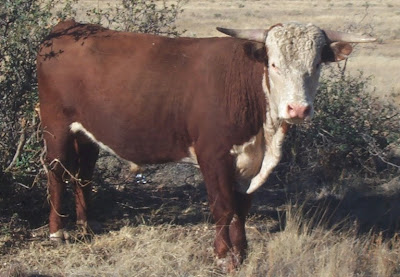 (Try not to picture where the steaks and hamburgers are going to come from.)
Posted by Catalyst at 1:45 PM 9 comments: 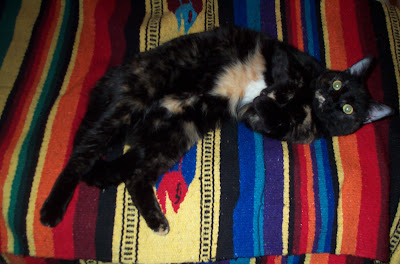 Jazz on a Mexican blanket.

Take a look at this. You might have to blow it up by clicking on the picture to "get the picture".

It's a little bit of "the Old West" sort of superimposed on "the new West". Those are the Bradshaw mountains in the distance, part of the town of Prescott Valley a little closer (where the trees are) and a small herd of cows on what apparently is still ranchland.

Would have been better if I'd have stopped to take the picture when the cows were right up by the fence.

Smears, Lies and Politics as usual

Someone I know told me today that they would vote for John McCain for President this year. I respect this person but I can't respect their reasons. #1 was Barack Obama's supposed relationship with 1960's Weatherman William Ayres. #2 was his relationship with Reverend Jeremiah Wright.

You can find Senator Obama's explanation on this web site.

I must admit I have never been a fan of Senator John McCain but I sympathized with him when his 2000 presidential campaign was derailed by smears and lies from the George Bush campaign in South Carolina.

What really disappoints me is that Senator McCain has now adopted this same campaign tactic to try to defeat Senator Obama.

As the BRD was moving this week, she and SWMBO traded living room furniture. Whereas ours was wicker with an off-white upholstery, the BRD's was big, puffy and dark green.

On moving day, Jazz holed up on a shelf in a bedroom closet and stayed there for 8 hours or so. Finally, in the evening, she came out and walked (or stalked) very slowly over to the big couch and carefully began sniffing it. Not only is it new, it carries the scent of a couple of strange cats.

But by last night, Muggles (left) and Smoke (center) seem to have made their peace with it. Jazz (right) is still sniffing. 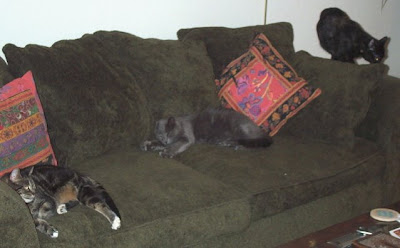 O.K. I'm sorry. I really meant to keep politics off this blog. For the most part. But I can't hold myself back.

During the primary season, I was a strong backer of Hillary Clinton, which led to a bit of a contretemps with Phoebe Fay, during which we didn't talk for quite awhile. But I'm over that now. Her guy won and I now support him fervidly.

So fervidly, in fact, that I am ready to wring John McCain's neck. This guy, who had a pretty decent reputation except for his temper, the Keating episode, his drinking, his gambling, his disgraceful treatment of his first wife and, of course, his lying ways that pissed off many voters in the Arizona Republican (not to mention Democratic) party. Even McCain has said "Barry Goldwater never liked me. I'm not sure why." Well, hell, John, I think I can tell you. Barry was a man of his word and you never were, in spite of all your politi-speak bullshit about "straight talk" and "maverick". We could trust Barry, whether we agreed with him or not, to say and MEAN what he said. That was REAL straight talk.

But even more so, in this campaign, against a Democratic candidate who seems to be, above all, decent . . . you, John McCain, have been a complete ass. Your arrogant attitude at the first debate. The lies you or your campaign have been spewing forth while you keep talking about how honest and straightforward you are. Your complete rudeness to Barack Obama when he tries to "make nice" with you.

I'm sorry, my fellow Arizonans and Republicans nationwide, this guy (McCain) is running a desperate campaign worthy only of Karl Rove and his numbers are sinking by the day.