The mercury in my thermometer is topping out at about 45 degrees today.

And the wind is blowing, as it usually does here in Prescott Valley.

The first day of Spring in the Northern Hemisphere of the globe is still three weeks away, regardless of what your particular groundhog or weather prognosticator predicts.

But that hasn't stopped the blood from speeding up in SWMBO's veins.

Nor of visions of seedlings dancing through her dreams.

So she recently took delivery of a three- (or four-, depending on how you look at it) shelf garden rack.

She didn't order it from IKEA but it did arrive in a small-ish, flat carton with no instructions included.

But she comes from a family of handymen and general contractors which includes a father, a brother and a son to whom assembly instructions are what one consults when all else fails.

So she launched into it and (with my gentle observation that one of the shelves end supports was upside down) soon had it all lashed together. 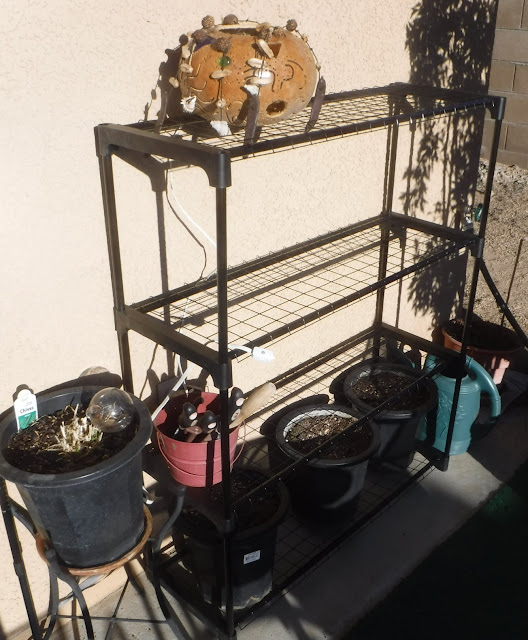 There are a few pots of soil awaiting plantings.
We're thinking mostly herbs.
Parsley and basil and thyme and maybe some rosemary and sage and spicy peppers and, of course, the requisite cherry tomatoes in the barrel across the patio.
But in spite of a new law in Arizona allowing personal growing in a limited sense and recreational use of the products thereof, she hasn't mentioned her own private marijuana bush.
Yet.
Posted by Catalyst at 2:58 PM