YAH, SURE, YOU BETCHA

When the urge hits to try a new recipe in the Taylor Family Kitchens I often wonder what prompted that urge.

Such was the situation yesterday when I decided to conquer the Swedish Almond Cake.

Loaded with sugar, as it is, one might have attributed it to yesterday's date and what that might have stirred up in the cerebrum.

But it's been roughly two decades since I last indulged in what Baseball Steve referred to as The Devil's Lettuce in a text yesterday evening.

So going another way it could be my 75 percent Scandinavian ancestry that pushed the recipe forth.

But that ancestry is Norwegian and this is, reputedly, a Swedish recipe.

Never mind that it came from Dorie Greenspan, not exactly a Swedish name.

So let's chalk it up to just plain whimsy and have at it.

It turned out pretty darned good, by the way, and according to the praise from SWMBO. 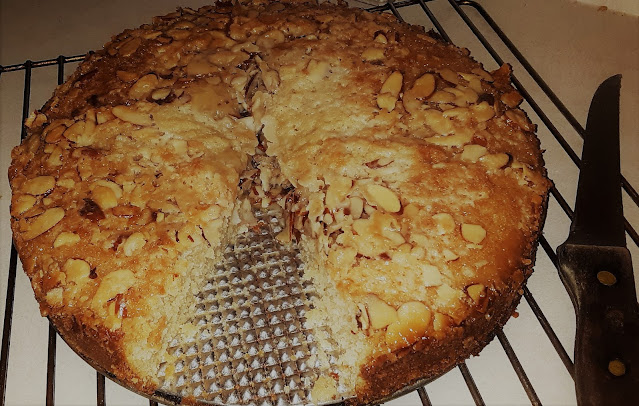 If I make the recipe again, I'll make some alterations because of our elevation.

We're at around 5,000 feet and Dorie probably wrote her recipe and baked her cake at around sea level.

I keep being reminded that some things behave differently in the oven at higher elevations and this one did bake slower than the recipe stated.

Nevertheless, it's nearly half gone now and probably will be finished off by tomorrow.

Hint: it's extra good with a slosh of whipped topping or probably some vanilla ice cream would add to the flavor bump too.

And for you people who always ask me for the recipe, just Google Swedish Almond Cake.