One of the bloggers I've begun following fairly recently, Tasker Dunham in Yorkshire, posted the other day a review of a book he'd just read, "The Great Railway Bazaar" by Paul Theroux.

I think it was the first of many books he wrote about travel and, specifically, railroad travel.

It was published back in the 1970's and I had read it shortly after it came out.

All of which put me into Throwback Mode and reminded me of a photo of Judy and I when we were doing our railroad travel in Europe in 1985.

On one leg of our Eurail adventure I inveigled someone to take a photo of us as we were about to board a train.

In my faded memory it was a train called the Orient Express, though it wasn't that Orient Express but a new train named that, no doubt, for the impressionable American tourists.

But, though my memory was that there was a sign on the outside of the train car carrying that name, I find no evidence of it in the surviving photo. 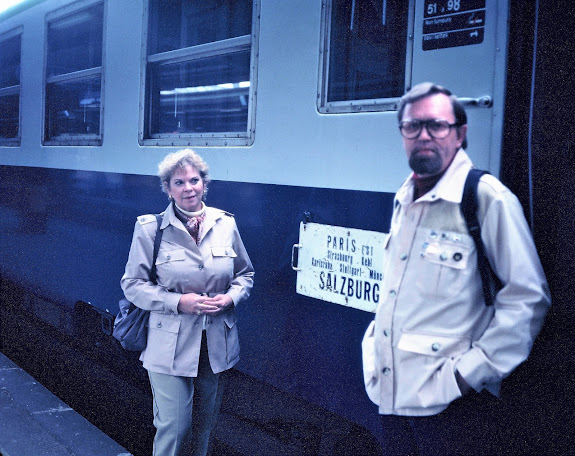 But there we are, anyway, about to join fellow passengers on a train that ran from Paris, France to Salzburg, Austria, at least.

We were both train buffs and became enamored of the trains that shuttled us around Europe for a few weeks.

I remember a marvelous meal with wine in a dining car between Innsbruck, Austria and Florence, Italy.

I recall the wonderfully scenic trip through the Alps going to Innsbruck.

And seeing the beautiful golden mustard fields around Dijon, France while speeding our way on a bullet train from the Mediterranean coast up to Paris.

Those were good times and while we never achieved our aim of getting back to Europe we made many memories to last a lifetime in that glorious month of April, 1985.

(Some memories are fuzzier than others but . . .)